WHAT PEOPLE HAVE SAID

In December 2012 the learning disabled actor and director Ellen Goodey co-wrote and co-directed two pilot performances of The Princess of the Graveyard Palace, supported by Ray Downing as her mentor and co-director and by Chris Goodey, her father, as dramaturge, as well as by Stratford Circus and Face Front Inclusive Theatre. Ellen worked in a unique way with professional artists at her disposal, developing her skills as an arts maker, creating an innovative and promising new work. The invited audience were arts practitioners and managers, including three arts assessors who were impressed by Ellen’s work

Ellen chose to work with a group of artists from trainees to experienced professionals, and gained the respect of her team as well as the audience. (‘It was a good learning experience to be directed by Ellen, she made me question my own approach to inclusive theatre; it was great to see her develop her own voice as a leader’ – Annie Smol, Actor and Artistic Director, Face Front Inclusive Theatre & Actor. ‘Ellen’s directing was very generous and consistent’ – Miranda Keeling, Actor/Artistic Enabler). As Ellen states, ‘This was the first show that I directed, and I liked it.’ In a future full production Ellen would prefer to concentrate on the writing and directing, with another actor replacing her in her original role. ‘It is clear that Ellen as the lead artist is able not only to generate the initial ideas but also to respond to ideas from other members of the team through the rehearsal process.

I like the three act structure – it’s strong and it appeals a wide range of audiences. The physical theatre aspects are very strong, the chants in unison, the re-telling of Mabel’s incarceration and the many silent voices beside her is brilliantly portrayed.

I thoroughly enjoyed the performance on Friday. The bringing together of the different elements – the story of the princess, the dream sequences exploring attitudes to people with learning difficulties and the introduction of Mable who had spent so much of her life in  an “asylum”. 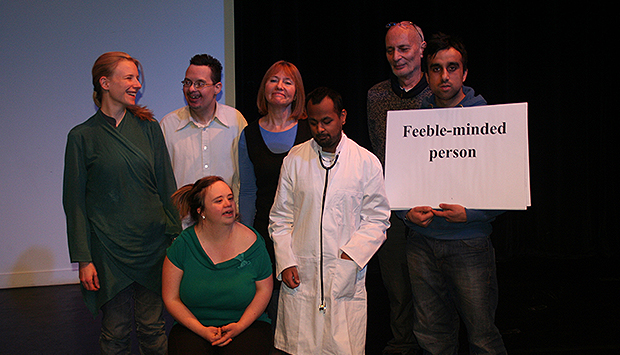